Every time you replace a less efficient shower head in your home, apartment, or institutional or commercial building with a water- and energy-conserving High Sierra Showerheads® model, you help support a better, more sustainable future for the planet.

For example, by switching from a 2.5 gallons per minute (gpm) shower head to one of High Sierra’s 1.5 gpm models, each and every month you will:

These savings estimates are based on two people using a shower head daily, each taking a ten-minute shower. If more people use that shower head or anyone takes longer or more frequent showers, you’ll save even more. (Go check out the math behind this.)

We aren’t referring to our taste in music. Or calling other shower head makers insincere.

It’s all about materials! High Sierra’s shower heads are nearly all-metal. Their core parts are made of solid brass and stainless steel. Tips and other decorative parts? Also metal, made from heavy-duty zinc or aluminum. Their non-metal parts? They’re made of the highest quality silicone rubber. That’s a non-reactive material widely used in the medical and food industries.

Nearly all other affordably-priced shower heads today are made almost entirely of plastic. And don’t be fooled: many shower heads that “look metal” are still made of plastic, with just an ultra-thin coat of metal plating.

Three Reasons Your Next Shower Head Should be All-Metal

1. They’re durable and built to last

Metal shower heads like High Sierra’s are highly durable. Because you typically won’t replace them nearly as often, they use fewer resources. That’s a big sustainability win.

Plastic shower heads are more breakable. When a shower head made of plastic has a chip or crack due to impact, it often needs to be replaced. Plastics also break down due to wear, temperature fluctuations, and naturally occurring minerals found in the water supply.

Each time a broken plastic shower head is thrown away, it adds waste to landfills – or elsewhere in the environment. Also, each time you have to get a new shower head, that’s a negative for your wallet and for sustainability. That’s yet more energy use and greenhouse gas emissions from the new shower head’s manufacture, transport, and packaging.

The metals in High Sierra’s shower heads are highly valued. And extensively recycled. For example, steel is the most recycled material on the planet, with an overall recycling rate of 86% in 2014. Recycling metals like steel and brass (a copper and zinc alloy) saves energy, compared with mining and refining pure metals. And these recycled metals perform equally as well as new materials. That makes metal products far more sustainable.

In contrast, the plastic in other shower heads, made from fossil fuel-derived chemicals, is cheap, bulky, and unwanted. Only 9% of plastic gets recycled. And unless its sources are pure, each new generation typically degrades in performance. There are many different types of plastic. Sometimes, a batch of recycled plastic containing a mix of types can contaminate that batch. In other instances, reinforcements, fillers, and colorants mixed into some plastic products in a batch will do the same.

Typically products made from plastics are discarded. Some of that discarded waste ends up in landfills, especially here in the USA. And a smaller amount is incinerated, which generates its own pollution. Yet globally, a vast amount of it continues to accumulate in our planet’s ecosystem.

Today, global plastic waste totals approximately 381 million tons per year. The USA, along with nations like India and China, are among the largest polluters, but it’s a truly global problem. In particular, our shared oceans are at risk. Some 8.8 million tons of additional plastic ended up in the world’s oceans in just a single year, 2010. That’s equivalent to pushing five plastic grocery bags of plastic trash directly into our oceans from every single foot of coastline around the world.

3. They’re healthier for people and the environment

Both metals and plastics impact the environment when extracting raw materials, and when producing, transporting, and using them. Arguably, however, plastics are much worse from a sustainability standpoint. That’s partly because such a vast share of plastics ends up as waste. And also because metals like steel and brass are relatively durable and inert. In contrast, plastics are more likely to fracture into smaller pieces, be wind-blown and water-carried, and pervade our environment.

A 2017 United Nations conference fact sheet estimated plastic waste in and around Earth’s oceans kills up to 1 million seabirds and 100,000 sea mammals each year, along with deaths to marine turtles and countless fish.

And we humans are not immune from this impact: we’re increasingly ingesting plastic-related chemicals. Some chemical compounds and additives found in plastic products, including certain “endocrine disruptors,” take a toll on human health and development.

Bottom line: When choosing a shower head, consider the materials used to make it!

High Sierra Showerheads’ most popular shower head model is also our smallest: the Classic PLUS™. It fits in the palm of your hand. Measuring about 3 inches long and 1 inch wide and weighing under 5 ounces, it’s one of the industry’s most compact shower heads. Both its physical and carbon footprints are sleek and minimal – a big plus for sustainability!

The Classic PLUS is mighty for its size, immersing you in an invigorating spray of large, heavy, high-energy droplets. Customers with long or thick hair consistently review its shower spray very highly. It’s is also a top-reviewed shower head, with Best Picks from CNET, Wirecutter (a New York Times company), CNN Underscored, Popular Science, and others!

Instead of creating oversized rain showers that look impressive – but too often drizzle out a disappointing spray – the Classic PLUS gives you a fantastic showering experience in a compact package.

And speaking of packaging … 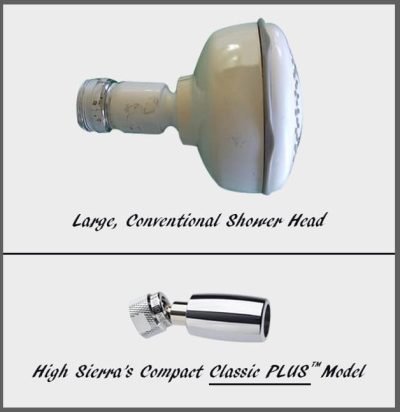 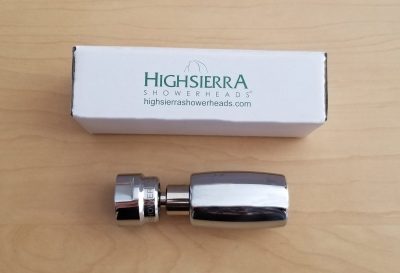 Many shower heads come with extra packaging. Like hard plastic cases for shelf display, which you have to laboriously cut away and then throw away, going into a landfill. Those are a sustainability ‘minus.’

In contrast, High Sierra’s products ship with less packaging. And of a more ecologically-friendly kind.

Our compact Classic PLUS model, for instance, is packed in an equally compact, recyclable cardboard box. A box that’s just big enough to hold and protect it – and not a bit larger.

In 2019, High Sierra installed a 10.46 kW solar array, offsetting 100% of the electricity we use at our factory site for assembly and general operations.

We partnered with with Fresno-based Trinity Power, who integrated SunPower solar panels, a SolarEdge DC-to-AC inverter, and a Nuance Energy ground-mounted racking system.

We’re hoping this solar installation will set a sustainability example for the entire shower head industry! 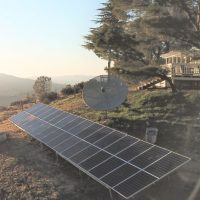 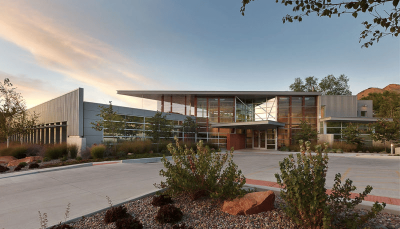 Planning a green building project? Such as a project guided by certifications and standards such as LEED, Passive House, or Net-Zero Energy?

High Sierra’s shower heads are a perfect fit for these projects. They’ll help you save on both your water and energy use budgets and meet your sustainability goals.

The assumptions and math behind our sustainability impact.

While some vendors claim sustainability benefits, we document them. (Hey, we’re nerds.)

When calculating your sustainability impact from switching to one of our shower heads, here are the assumptions we made; the simple, understandable math we used; and the data on which we relied:

All savings estimates are based on:

Your savings could be greater if more people share the shower, if they take longer and/or more frequent showers, if the water is left running to warm up, or if the shower head being replaced uses more than 2.5 gpm (perhaps because its flow restrictor has been removed or modified, or the shower head is an older, less efficient model).

And savings could also be less, for instance, if just one person uses the shower, or the replaced shower head is already a more efficient low-flow model that uses 2.0 gpm or less.

Save water estimates based on:

Save energy estimates based on:

Because all of these factors may offset, and will depend on your specific site, water heater, plumbing layout, pipe insulation, and showering practices, we’re using the much simpler calculation above.

Over and above what you’ll save in your home, apartment, or institutional or commercial building, your water supplier will also benefit. They’ll realize savings on energy used and greenhouse gases emitted, further helping the environment.

By replacing your higher-flowing shower head with a High Sierra 1.5 gpm model, they’ll save by not having to transport 600 gallons of water to your home or business each month, by running pumps or otherwise. They also won’t need to treat those 600 gallons of water prior to their arrival. Nor once again, before they’re discharged back into rivers, lakes, or oceans. That also reduces their usage of treatment chemicals, as well.

High Sierra Showerheads® warrants each new shower head it manufactures to be free from defective materials and workmanship. High Sierra Showerheads® agrees to remedy any such defect or replace the unit, at our option, provided the unit is delivered to us, intact, with all transportation charges prepaid to our factory, for a period of 2 years from the date of sale to the original purchaser.

If for any reason you are not 100% satisfied with the High Sierra Showerhead®, you may return it for a refund or exchange. Just return the product to us in like-new condition within 60 days from the date it was shipped to you, and we will refund the full purchase price less shipping costs, which are nonrefundable. High Sierra Showerheads® reserves the right to determine whether a full or partial refund or an exchange is merited based on the condition of the returned merchandise.